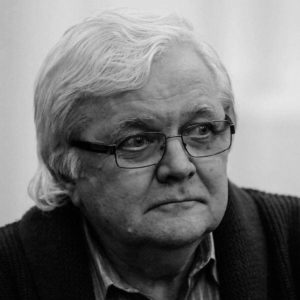 Ján Ďuriš, cameraman and pedagogue, was born in 1945 in Vuková, Romania. After graduating from FAMU in Prague, he devoted himself to documentary filmmaking. He made his feature film debut in 1979 with director Ján Zeman’s Hra na telo. He is signed under a number of successful Slovak films, the most prominent of which are the films in which he collaborated with director Juraj Jakubisek. He won a camera award at the Montreal IFF for his film Nejasná zpráva o konci světa (The Uncertain News of the End of the World, 1977). Since 2003 he has been leading the Studio of Cinematography at the Academy of Performing Arts in Bratislava. He is a member of the Association of Slovak Cameramen.