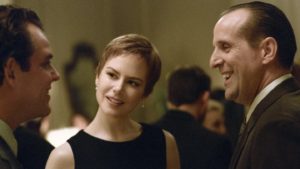 On the day of the tenth anniversary of the death of her husband, Anna opens a door to a boy who claims to be Sean, her deceased husband. He is exactly ten-years-old and knows everything about Anna and her family. It’s up to Anna to trust him or not. Both critics and audiences slated the remarkable picture Birth at the time. Only in recent years has it got the attention it deserves and it has been called one of the most underrated films of the last twenty years. The exceptional performances of the cinematographer Harris Savides and music author Alexandre Desplat create a connection between the dream world and the drama of suffering the loss of a loved one. This film is almost impossible to see in Czech cinemas, so it will be a very rare screening.

For thirteen year-old Marta, who recently moved back from Switzerland to her home village in Calabria, it is very difficult to blend in. Following her mom’s advice she starts to attend classes of catechism to make new friends. She learns how the local parish works, struggles with puberty and her changing body and seeks her own path to faith. The Italian director Alice Rohrwacher’s debut brings insight into the changing role of the Catholic Church in contemporary Italy through an adolescent’s story. Corpo Celeste aroused great expectations at the 2011 Cannes Film Festival and preceded the film The Wonders, which won the Golden Palm three years later.

THE SPIRIT OF THE BEEHIVE

When a big truck arrives in a dreary Spanish village just after the civil war, six-year-old Anna, her slightly older sister Isabel, and other children impatiently shout, “Cinema, Cinema!” They have no clue as to how much the monster from the Frankenstein film will trouble them. An extraordinary film, The Spirit of the Beehive, the debut of director Victor Eric, is, according to many, one of the most beautiful films ever made. The poetic camera of Luisa Cuadrado captures the child’s world, the formation of memory and the consequences of the civil war as a critique of Franco’s regime.